Blog Tour Stop: Interview with D.A. Serra (Author of Primal) & A Giveaway of a copy of Primal

Hey guys! Continuing the Primal Blog Tour, today we have for you an Author Interview with D.A. Serra, the author of the amazing book Primal (click for our review). 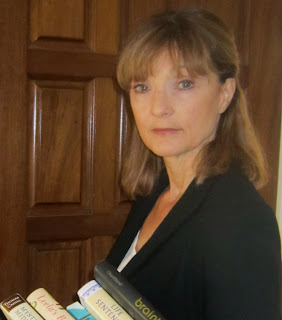 A little about D.A. Serra:

Deborah Serra was a screenwriter for twenty years and recognized by the Writer’s Guild for her long term continuous employment. She has written ten TV movies, four feature films, and numerous TV episodes including two years as a staff writer for NBC.  She worked for top producers, directors, and actors.  She has taught writing at the University of California, San Diego, Wofford College and at writers’ conferences nationwide.  Serra has now turned her attention to novels, and she was honored as a recent recipient of the prestigious Hawthornden Literary Fellowship, and as a semi-finalist for the William Faulkner-William Wisdom Creative Writing Award given by the Faulkner Society in New Orleans, LA.

Continuing on, here is our interview with D.A Serra:

1. What inspired you to write Primal?

Primal was a screenplay before it was a novel. I'd been working in Hollywood for a few years and I'd come to understand that the prevailing opinion was that women couldn't write gritty crime or action. If you wanted that genre of the story you hired a male writer. I found this not only insulting, and inaccurate, it negatively influenced a women writers' ability to make a living in a town that was already tough on women. I wanted to prove that women can write hard-edged thrillers: a writer is a writer. This is why Primal is written under gender-neutral initials. It needed to go out into the screen world marketplace on an even playing field. It did. It sold. Studios and producers were visibly shocked when they met me and I turned out to be Deborah and not Daniel. Once I had decided to write Primal, I wanted to go all the way and make the lead character a woman. At the time, it was unusual for a woman to carry this kind of movie. Then, I just let my imagination go.

2. How is writing a novel different from writing a movie script?

Film is really about your eyes, where novels are really about your ears. Most likely when you read you hear the words in your head. This is why editors and reviewers talk about the "voice" in a written work, whereas on the screen the story is told visually. Additionally, in film and television, nearly everything the audience needs to know must be said in dialogue, consequently, enriching vocabulary and speech patters with specific characterization is critical; in novel form, writers have the freedom to take their time and write at length about what a character is thinking, or perhaps review a moment in a character's past, all of which leads to rich characterization. Novelists do not work under the rigid time constraints required for screen work. There are pros and cons to both types of writing. Different worls - different challenges.

3.  Where is your favorite place to write?

I have a pretty little office in my home where I do the majority of my writing. If I'm feeling imaginatively cramped I will go to a particular café where I can sit in crowded anonymity for hours.

Decide on a specific schedule, stars with something you know you can do, whether it is two hours or six hours, then respect yourself and you work enough to stick to that schedule--even if you're staring into space do not give in. So often not finishing a single page is exactly what you needed to do that day--the next day you will soar. Give yourself permission to accept the sitting and the silence. It was not for nothing. It is never for nothing because your unconscious is working--you conscious mind is the last to know.

A few of my favorite films: The Usual Suspects, Best in Show, Midnight in Paris, Moonstruck, Amadeus. For me, I wrote a dramatic, tragic, and musical biography of the life of Maria Callas that I just love. It was an assignment so I do not own it, and although the producer truly loves the project, he is doing other things now and so it is sitting on the shelf at Vanguard Films. I still hope for it.

6. Are you excited for the Primal movie since James Cameron bought the script rights?

Primal was originally bought by Jim Cameron, and in a subsequent business deal the rights were transferred to Twentieth Century Fox. It is in their library now and I don't know what its status is. Screenwriters do not own copyright like novelists--unfortunately. Once it's gone, you're out.

7. Who is the writer, alive or deceased, that you admire most?

I am an intrepid traveler. In the last two years I've been in eight countries the majority of the time by myself. I'm lucky that my husband understands this solo wandering. Now that my kids are in college I am taking advantage of that freedom. My works comes with me wherever I go, one of the real benefits of being a writer.

Thanks so much D.A. for those awesome and thorough answers! As you can see, D.A. is an amazing and inspiring person. This interview showcases only some of her massive writing talent, so I suggest you read Primal write away! Thank you D.A. for visiting A Walk on Words!

Now it's time for our GIVEAWAY OF A PDF OF PRIMAL!
Enter with Rafflecopter: