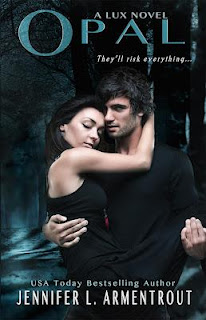 No one is like Daemon Black.
When he set out to prove his feelings for me, he wasn’t fooling around. Doubting him isn’t something I’ll do again, and now that we’ve made it through the rough patches, well... There’s a lot of spontaneous combustion going on.
But even he can’t protect his family from the danger of trying to free those they love.
After everything, I’m no longer the same Katy. I’m different... And I’m not sure what that will mean in the end. When each step we take in discovering the truth puts us in the path of the secret organization responsible for torturing and testing hybrids, the more I realize there is no end to what I’m capable of. The death of someone close still lingers, help comes from the most unlikely source, and friends will become the deadliest of enemies, but we won’t turn back. Even if the outcome will shatter our worlds forever.
Together we’re stronger... and they know it.

Dani’s Review:
Wow! Opal led me on a roller coaster of emotions. Crimson love, deep blue sorrow, burning red anger, and the bitter taste of guilt are only a few of the feelings that ran through the characters in this book. The plot and character development was wonderful! Opal will not disappoint you.

Onyx, the second book in the Lux series, ended with the sudden reappearance of Dawson, Daemon and Dee’s brother. Most of Onyx was dedicated to rescuing Dawson from the hands of the DOD, or Department of Defense, so we readers thought that all our characters’ problems would be solved when they finally met their goal. But no, getting Dawson back was the catalyst for a whole series of new obstacles to conquer. Now, Katy and Daemon have to rescue Dawson’s girlfriend Bethany or risk losing Dawson again.

The last paragraph of the summary above really captures the emotions Katy is battling. She’s afraid to lose Daemon and everyone she loves. She blames herself for the death of Adam and wonders if her friendship with Dee will ever return. She’s terrified of losing herself, wondering What happened to the old Katy? Who am I? But don’t worry, Katy stays strong even in the darkest hours--or should I say pages?--of Opal.

Yes, there are several wonderfully cute and sexy Katy and Daemon scenes. There’s even some Daemon-needs-to-control-his-male-testosterone-protectiveness-feelings scenes when an unexpected character who we thought we would never see again shows up. What would a Lux book be like without Daemon’s sexyness and humour?
Opal truly is an amazing book. It really deserves 6 out of 5 stars, but I couldn’t put that on top because I would be breaking the rules of the rating system. It is the epitome of a perfect book. The only possible fault that I found is the HUGE cliffhanger ending. Shh...I shan’t say anymore or else I would giving out spoilers! *Duct tapes mouth shut*

Jenn is so amazing. The sneaky woman somehow slipped in a teaser from APOLLYON (Covenant #4)  in Opal! In Opal, Katy is reading a book with an amber cover and she puts a teaser from it into her Teaser Tuesday on her blog. Hmm...I wonder what book has an AMBER colored cover?
I was his power-up — the ace up his sleeve. I was the beginning and he was the end. And together, we were everything."
-Apollyon teaser!

Daemon snatched the yellow packages from my hands. “Oh! Books! You have books!
-Daemon mocking Katy. Well, imitation is the most sincere form of flattery.

Okay so actually I will say ONE small spoiler.


Now wasn’t that a wonderful teaser that makes you want to get your hands on Opal NOW? :)

This book started out a little bit slow for my tastes, but it just got quicker and quicker towards the end, which by the way just DESTROYED me, ripped out my heart, and stomped on it on the sidewalk. After reading the last chapter, I thought I got a defective copy of the book because I couldn’t believe it just ended where it did. A warning: it is a killer. Jen sure knows how to make people want to read her next book with those kind of cliffhangers.

I agree with Danielle that this was a rollercoaster of emotions. I was so suspicious at some points (one character everyone hates comes back...), and at other times I was just swelling up and fanning myself over that piece of pure hotness Daemon Black. I was fangirling and giggling and squealing internally basically in every scene he was in. *giggles* He is just a sweetie towards Katy, even though he has this whole bad-boy persona going for him. He really opens up to her in this book.  I loved to see his relationship with his brother Dawson too (he came back in Onyx). Other times in Opal I was just wide eyed and gaping at the pages because I could not believe what was happening (yeah the ending). There is a change in Katy, both physically and mentally, but I think it is for the better for everyone’s sake. There are also plenty of new characters and ideas introduced in Opal.

Opal was very well written, and it’s plot just really drew me in. Can’t say too much about it though because I know I will leak something out I will regret later. There is a lot of spoilery stuff I need to get out, but not in this review :). It took me a few hours to finish total, but those hours just flew past me and felt like minutes while I was reading. JLA’s Lux series is one I seriously recommend to everyone, and I will be putting Origin(Lux #4) on my to-read list! Full 5 stars!
Posted by Danielle at 2:41 PM