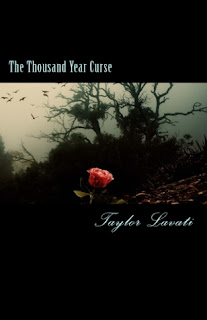 Thank you to Taylor for giving me a review copy of her novel in exchange for my fair and honest review.

Goodreads synopsis:
Being a teenager isn't all fun and games for seventeen year old Ryder. After being thrown down the social hierarchy, Ryder Mason has one goal for her senior year-survive.

Within the first month of school, Ryder goes from bullied teen to a cursed half goddess with two boyfriends. As if that wasn't enough, she travels into the Underworld to confront Hades about the curse and her missing mother.

Ryder delves head first into a Godly world as her knights fight to seek her approval, her best friend's loyalties are tested and people's true intentions are shown in the first Curse Books novel.

Before I say anything about my opinion of this novel, I would like to make a few points. 1) This is a SELF-PUBLISHED novel. 2) This is a DEBUT novel. 3) The author is very, very young to be publishing a book. 4) She wrote this novel for the NaNoWriMo writing contest! For those of you who don't know what it is, it is a challenge to write a full-length 50,000 novel in only 30 days during the month of November. 5) I am basing my review off of an ARC copy. The final copy is most likely better than the copy I read.

Let's all give a round of applause to Taylor for her achievements! :)

I enjoyed The Thousand Year Curse, but some parts of it disappointed me. The plot structure, character development, and Greek mythology concepts were great, but it didn't have that special sparkle. The cake was there, but it didn't have much icing or decoration. The imagery was almost nonexistent and some sentences didn't quite flow. I felt like some chapters were well put together while others were jumbled and crammed together as if the author was writing it in a hurry. Oh wait, Taylor somewhat was in a hurry. The very first copy of this 334 page novel was written in 30 days.

The Thousand Year Curse needs a good, thorough edit. It has the potential to be amazing, but it needs some help in terms of the flow of the writing. Some scenes captured my attention and had me tearing through the pages, but others were "bleh" and I skimmed it.

This novel's greatest quality? The plot.
Ryder is a teenage girl in her senior year who was besties with the most popular girl of her grade until a misunderstanding occurred a few years ago. Now? For lack of a better term, she is a nobody. She doesn't have any friends except a boy named Junior. And even worse, she has strange visions of people she's never seen before! Ryder doesn't think she's anything special--until two extremely attractive boys arrive at her school and begin to fight for her attention.

I liked that Ryder is an "ordinary" teenager who can't fly, can't cast spells, can't drink blood, and is just trying to survive high school. Lately I've been reading a lot of paranormal novels, and it was nice to read something different. The author does a good job of helping the reader get to know Ryder and the two boys in the love triangle, Ollie and Ari. Now those were two well created characters ;) The dialogue and banter between the three was entertaining and hilarious. It was fun to read Ollie and Ari's confrontations! So much tension floating around in the air...and testosterone!

Greek mythology plays a huge part in this novel. After the "Omg I can't believe it I'm cursed half- goddess no what this can't be true"part, the reader dives headfirst into Underworld. Literally. Ollie and Ari seemed sorta stupid considering who they are...I don't want to spoil anything but I'm sure you can guess that they are characters from Greek mythology! While reading I was thinking, "Really? After who knows how many years of being alive, you still don't know all the gods and goddesses? You don't even know their animal symbols?"

Unfortunately, there isn't much action.  This is definitely a romance novel. Ollie and Ryder are great characters who really are the reason a reader doesn't stop reading after the first few chapters. The reader wants to know how this love triangle will end--Ollie or Ryder?

A pretty good read, but definitely not perfect. If you want a quick read with a ton of romance and Greek mythology, The Thousand Year Curse is for you! Seriously, consider reading this book :)