Review: Losing it by Cora Carmack 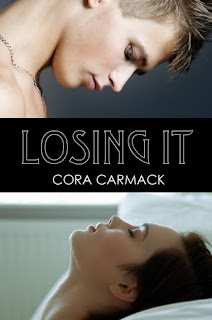 Bliss Edwards is about to graduate from college and still has hers. Sick of being the only virgin among her friends, she decides the best way to deal with the problem is to lose it as quickly and simply as possible-- a one-night stand. But her plan turns out to be anything but simple when she freaks out and leaves a gorgeous guy alone and naked in her bed with an excuse that no one with half-a-brain would ever believe. And as if that weren't embarrassing enough, when she arrives for her first class of her last college semester, she recognizes her new theatre professor. She'd left him naked in her bed about 8 hours earlier


Note: This is NOT a YA novel, this is New Adult! There's not really much that separates it from YA and NA, but it is labeled NA.

Usually I don't enjoy romances without a paranormal aspect very much, but this novel is an exception. Losing It is a wonderful love story that had me literally laughing out loud with its many awkward moments, jokes, and hilariously lame excuses--such as pretending to own a gray cat named Hamlet. I mean, out of all the excuses in the world to use, who would pretend to own a cat that she has to pick up from the people taking care of it? None other than our main character, the lovely Bliss Edwards.

Don't you love the names of the 2 protagonists? Bliss and Garrick sound so well together! My favorite awkward moment was when Bliss walks into theatre class and stops dead in her tracks to come face to face with her new theatre professor: the man she left naked in her bed because she had to go pick up her imaginary cat. From that point on, the tension between the two was so, so palpable I could feel it through the screen of my kindle! But I knew they were destined to be together, and yes, there are several steamy scenes ;)

I love the incorporation of the arts in this novel. I'm always searching for books that have dance in them (naturally since I'm a dancer!), but a book with theatre in it is just as good. Bliss is a talented actress who is conflicted between pursuing her career as an actress or a stage manager. She hopes to score the lead in her university's end of semester final play because she really feels a connection with the character. I won't say which play it is so you can be surprised! But if you're like me and you don't know anything about classical Greek plays with modern twists, then you probably have never heard of it.

Okay now let's talk about Garrick. He is described as being the most gorgeous man Bliss has ever seen with his blonde hair falling into his eyes and his popping blue eyes. And even better, he knows his Shakespeare and can even quote it! Plus he's British, if that means anything to you... (Yup I can hear those 1D and The Wanted fans screaming) Not only is he adorable, he is also super sweet and really cares about Bliss. He's always looking out for her.

Cora Carmack did a great job writing this novel. It has everything that makes a good romance novel: a hunky guy, an adorably awkward girl, funny dialogue with each other and friends, a good-paced plot, and just a good connection among all the parts. I knocked off a star because I felt a smidge of insta-love. Don't get me wrong, I really enjoyed Losing It, but it wasn't perfect for me.

However, if you LOVE romance novels, I am sure that you will adore Losing It! Also, the epilogue is in Garrick's POV. Doesn't that make you want to get your butt to the library or book store right now? :)