Hi everyone! Welcome to A Walk on Words.  Today we are hosting Virtual Author Book Tour's blog tour for Solstice High by Ardash Vartparonian. We have a special guest who kindly agreed to let us interview her. She is quite the diva and carried her queen-bee attitude with her everywhere.

Give a round of applause to Rochelle Dubié!

1) Okay, let's just have an icebreaker of the world-renowned game "Would you rather..."
Would you rather eat a mountain of brusselsprouts or look for a tiny miniscule needle hidden in a haystack?

Okay, obviously you don’t know me. If I’m hungry enough, I’ll eat a mountain of anything. I may not be, like, the biggest fan of brusselsprouts ever, but yeah, I’d totally do it like no probs since it’s food. As to looking for that needle in the haystack I would never look for it myself, duh; I’d get Beth, Abigail or Harmony to do it for me. I feel like looking for that needle would involve a lot of muck and grime and stuff and eww, like, no way. That’s the whole point of being a queen bee: you get other dumb skanks to do that sort of work for you. I mean, it’s not like I’m scared of getting my hands dirty because God knows I have, but why do it yourself when you can delegate? I’m all for the distribution of power; as long as I’m the one distributing it.

2) Who is your favorite animated character?

Favourite animated character? That’s kind of tough since I haven’t really watched any cartoons or anything since I was, like, twelve or something. I guess if I had to choose I’d go for Maleficent from Sleeping Beauty. That bitch had class. She was, like, a total power-house, and I still don’t get why those other fairies, like, totally discriminated against her! Okay, maybe she didn’t have a stupid name like Flora, Fauna and Happy Weather or whatever, but she didn’t take any crap from anyone and was a strong, independent woman. Also she turned into a dragon. I mean, come one, a dragon. That speaks for itself, right? Dragons are totally in right now ever since that TV show with the blonde chick with three baby dragons came out.

Also, Cruella from 101 Dalmatians was totally fabulous (I’m totally anti-fur by the way, but that woman just oozed amazingness. She was so skinny… Bitch).

3) Who would you want to play you if Solstice High was made into a movie?

That's so lovely, you thinking anyone could ever play me in a movie. It would have to be me.

Total dealbreaker. No one can do me like I can.

4) Who is your favorite movie star? Why?

You know who I’m really into right now? Julianne Moore. I know, I know, she’s a ginger, but whatever, I guess there’re worse things you can do. But I was watching this movie called Chloe the other day and I love the fact that she’s just so comfortable in her own skin that she doesn’t mind going a bit lesbo for a role in a movie. That for me is, like, the meaning of sexy. Being so in comfortable with your body that you can just do anything sexually because you’re not afraid of any taboos or society blah blah blah’s. I think you gotta be pretty brave to do stuff like that, and I’m totally for it and think it’s great. I mean, how else can you know you’re not into something if you don’t give it a go at least once?

I’m not saying I’ve done the nasty with a girl (not denying it either; no comment. I’ll let you guys think over that one ;) but I think this ginger is actually a great role model since she can jump into any role thrown at her.

5) If your 3 friends are inside a burning building, you are outside of the building and therefore safe from the fire, and you only have time to say ONE friend, who would you save?
5) If
Okay, that’s such a bitchy question.

What, are we like twelve? Come on, you know me; I’d totally pile them all up in a wheelbarrow or whatever and push them out. Okay, being totally honest I might let Daphne stay in there a bit longer, maybe inhale a bit of smoke or maybe, even better, have her hair burn up. Could you even imagine that? It would be, like, totes hilair. Anyways the question is totally retarded because I’d just wave my hands and blow the house away and save everyone. (You should’ve asked what I was wearing while I saved everyone… I bought the cutest outfit for some serious butt-kicking the other day!) Anyways, I know Jonas said I can’t actually control fire, but you said it’s a building, and that I can move. I’ll huff and I’ll puff and I’ll blow the whole damn thing away and be, like, simply lovely.

I’m not saying this because I’m some sort of self-absorbed Barbie princess; it’s my duty as queen bee, and you should know how seriously I take that.

6) Back to the "would you rather's" to end our interview. Would you rather do your math homework or kiss someone you absolutely despise?

Yeah… This question doesn’t really apply to me. I mean, I don’t do Math and I’ve made out with plenty of people I ‘despise’ as you say. That’s a nice way of putting it by the way.

Like, I would say I’ve ‘made out with a bunch of skanks I can’t stand’ because I was dared to do it or to get some guy to eat out of the palm of my hand, so yeah, no real answer to the question there… Sorry, but, yeah, I’m not sorry.

Thanks Rochelle for having such an, uh, interesting interview! But kudos to you for being the most quirky, cool, and hilarious guest we've ever had.

See my review for Solstice High and interview with Ardash HERE.

Ardash Vartparonian was born in London but raised in Buenos Aires, Argentina. At the age of 18 he began his debut novel, Solstice High, and continued writing throughout his last year of school and first year of university, where he moved back to the UK to study English Literature at Edinburgh University. Now a fourth year student, Ardash enjoys going out with his friends, watching horror movies and reading fantasy books while trying to keep up with his university work.
Find Solstice High online:
Amazon
Goodreads 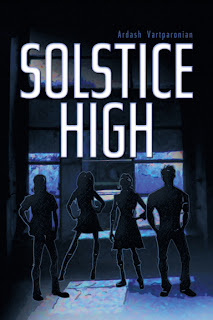 ~Dani <3 Have a fantastic summer!