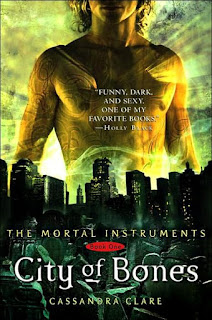 When fifteen-year-old Clary Fray heads out to the Pandemonium Club in New York City, she hardly expects to witness a murder--much less a murder committed by three teenagers covered with strange tattoos and brandishing bizarre weapons. Then the body disappears into th in air. It's hard to call the police when the murderers are invisible to everyone else and when there is nothing--not even a smear of blood--to show that a boy has died. Or was he a boy?
This is Clary's first meeting with Shadowhunters, warriors dedicated to ridding the earth of demons. It's also her first encounter with Jace, a Shadowhunter who looks a little like an angel and acts a lot like a jerk. Within twenty-four hours Clary is pulled into Jace's world with a vengeance, when her mother disappears and Clary herself is attacked by a daemon. But why would demons be interested in ordinary mundanes like Clary and her mother? And how did Clary suddenly get the Sight? That Shadowhunters would like to know.
Exotic and gritty, exhilarating and utterly gripping, Cassandra Clare's ferociously entertaining fantasy takes readers on a wild ride that they will never want to end.

Dani's Review:
I am reviewing this after I have read all of the books in The Mortal Instruments series that have been released. I found this second read to be even more enjoyable than the first because I could really analyze each character and watch how they grew as time went on. Cassandra Clare’s writing is chock full of description, imagery, and humorous dialogue. She has created a complex world with Shadowhunters, werewolves, vampires, faeries, demons, and warlocks; each with their own culture.

Clary is sucked into the Shadowhunter world by a fortuitous meeting with teenage Shadowhunters in the Pandemonium club. Her place in their hidden world is sealed when she discovers she has Shadowhunter blood running through her veins.

You will either love or hate this book. Some of you, like Steph, will be bored with Clare's slow-paced writing style and will stop reading after the first few chapters. Only two weeks have passed in this 485 page book. Others, like me, will become captivated with this strange world and its various characters. Clare has weaved one of the most complicated tapestries that I have ever seen. If the characters slip up even once, they will face dire consequences.

Quick rundown of the characters:
Jace: *sighs* A young shadowhunter who has killed more demons than anyone else of his age. He is as handsome as an angel, witty, and secretly broken inside. His father taught him that "To love is to destroy." His outer personality is really just an armor he uses to hide his true feelings. He won the 2011 YA Crush Tourney at the YA Sisterhood blog! Jace’s sexiness will cause you to keep reading even if you think the plot is boring!

Clary: You might be frustrated with Clary's supposed lack of usefulness. At first, I didn't like her. But as you keep reading this series, Clary becomes stronger and stronger.

Alec Lightwood: If I said anything about him, I would be giving away a rather large spoiler. I will say that he is Jace's parabatai, his "brother from another mother" for lack of a better definition.

Isabelle Lightwood: A confident, headstrong young woman who uses her beauty as a weapon. At one point, Jace wonders why Clary doesn't know that she beautiful and doesn't use her beauty like Isabelle. Isabelle is hostile to Clary at first because she has always been the only girl with a pack of boys. She feels a bit threatened.

Simon: Clary's best friend who is secretly in love with her. He is a cute, awkward geek who loves playing Dungeons and Dragons and reading anime. He is a good archer and uses his skills later in the book.

Magnus Bane: A warlock who loves sparkles. Really, no joke. He gels and sparkles his hair! He is not so much of a main character in this first book, but in the sequels he is definitely a major character.

I knocked off a star because at some points, I was bored in his book. There are a few slow points filled with smalltalk and humor, but sometimes humor cannot make a ton of dialogue interesting. Clare generally uses a lot of humorous dialogue in her writing.

Overall, a great book! The movie is coming out soon, but it might be nothing like the book. I don’t think the guy playing Jace is hot enough...but I like the girl who plays Clary! :)

Quotes:
“What are all these?" Clary asked.
"Vials of holy water, blessed knives, steel and silver blades," Jace said, piling the weapons on the floor beside him, "electrum wire - not much use at the moment but it's always good to have spares - silver bullets, charms of protetion, crucifixes, stars of David-"
"Jesus," said Clary
"I doubt he'd fit."
"Jace!" Clary was appalled.

“A diary with no drawings of me in it? Where are the torrid fantasies? The romance covers?” Jace

“He made a sound like a choked laughed before he reached out and pulled her into her arms. She was aware of Luke watching them from the window, but she shut her eyes resolutely and buried her face against Jace's shoulder. He smelled of salt and blood, and only when his mouth came close to her ear did she understand what he was saying, and it was the simplest litany of all: her name, just her name.”
ooh lala ;)