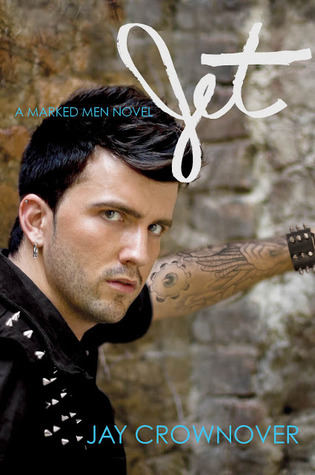 With his tight leather pants and a sharp edge that makes him dangerous, Jet Keller is every girl’s rock and roll fantasy. But Ayden Cross is done walking on the wild side with bad boys. She doesn’t want to give in to the heat she sees in Jet’s dark, haunted eyes. She’s afraid of getting burned from the sparks of their spontaneous combustion, even as his touch sets her on fire.

Jet can’t resist the Southern Belle with mile-long legs in cowboy boots who defies his every expectation. Yet the closer he feels to Ayden, the less he seems to know her. While he’s tempted to get under her skin and undo her in every way, he knows firsthand what happens to two people with very different ideas about relationships.

Will the blaze burn into an enduring love. . . or will it consume their dreams and turn them to ashes?


First off--thanks so much to William Morrow for giving me a copy of Rule (Book 1--and another bonus from that Molly McAdams Pranktacular Giveaway). That book gave me another series to dote on. I will probably review Rule at some point, but I read Jet (Book 2) right afterwards and I really wanted to do this one first.

Well, this is a deliciously yummy follow up Rule's story. I liked this story a lot, though not as much as Rule. Definitely knew the story between Jet and Ayden was coming up though after all that plotting trouble Jay Crownover went through to set this sequel up.

It all starts at a heavy metal concert...where Jet is performing and leading the crowd. After one drink too many, Ayden Cross is just about ready to throw herself at him and be accepted thanks to Jet's not so stellar reputation--but the thing she least expects? His complete and utter rejection. Not too long later, Jet becomes one of her roomies along with Cora, probably the worst thing to add to that humiliating confrontation. Doesn't help that Ayden and Jet are polar opposites, whose ideology of life is like black and white. They say opposites attract, but is that true for two people on the extremes of their spectrums?

Everything started off superbly in this novel. Ayden left behind all of her ghosts in her home state of rural Kentucky, trying to start anew in Denver and live life in the light.  Jet's a Denver native and has his music career on track, but his demon is constantly looking just over his shoulder and Jet doesn't think he'll be able to outrun 'it' no matter where he goes. The book is really like two "self-rediscovery" stories that just happen to crossover actually, and I think this really gave it a realistic touch.

But the one thing that made me give this 3 stars is Jay Crownover's decision to make TWO stubborn pigheads as her leads. I guess it works sometimes, but in this case, not so much. I like Jet and Ayden individually as characters, but when they are together? They are too caught up in their own problems to see the good things in front of them, especially Ayden. I'm not saying that they can't be knuckle headed, but it just was so prolonged through the entire book basically (except beginning and end). I kind of got fed up with the slow progression of Ayden and Jet's characters, and honestly? I just wanted to smack some common sense into their heads a few times. Shake them into seeing straight.

So, I didn't buy into Jet as much as Rule sold me on, but yes, once I get over the fact that there are two characters as stubborn as hell (and hey, there are lots of stubborn people in the world, so I got to be understanding), the themes of this book are really good. Jet has plenty to give, and also sets up for Rome (Book 3), which is Rome and Cora's story. Looking forward to that one, which I will read as soon as I can! Love these Marked Men books!
Posted by Unknown at 7:10 PM