Thank you so much to Mr. Johnson for giving me an e-book copy of his novel. 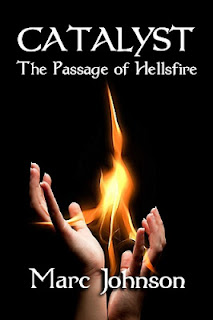 Goodreads Synopsis:
For centuries, the kingdom of Alexandria has protected Northern Shala from the monstrous creatures lurking in the Wastelands. Now, a dark force threatens that fragile peace.

Far from home, Alexandria's princess is abducted. When a young villager named Hellsire stumbles upon her and her captors, he rushes in to rescue her, alone and unarmed. His fear and fury unleash an uncontrollable magical force that grants him the power to save the princess--and change the world.

Hellsfire has never craved nor dreamed of power. But such magic as he now possessed has not been seen in Northern Shala for a thousand years, since the devastation of the War of the Wizards and the creation of the Wastelands.

Now Hellsfire must leave all he's ever known, and make a dangerous journey to learn to master this wild, ferocious power--power he knows he is not ready to wield. More difficult still, he needs to master his emotions. If he can't, the power will consume him, Alexandria will fall, and darkness will eclipse in the land, destroying everyone he loves.

In the dead of cold, the spark shall burn.

I planned on only reading a few chapters of Catalyst a night, but it hooked me in immediately at the prologue. This novel contains all of my favorite elements of fantasy novels: An author-created world, a unique type of magic, a fearless hero whose various mistakes while growing up are hilarious, mystical creatures, and most importantly, a compelling plot. The plot was so, so suspenseful. I anxiously kept reading late into the night, wondering if the characters would free themselves from their dangerous situations. The characters went through problem after problem, constantly stumbling into impossible predicaments. Yet somehow, Marc Johnson artfully crafted a logical solution for each one.

I loved reading about Hellsfire's various jumbled feelings. He felt lonely, abandoned, the joy of having a foster father, and the sorrow of losing a loved one all at the same time. He is urged by his mother to leave his childhood home when he accidentally reveals his magic power. After many harsh days of travel and surviving on his own, he reaches the home of a wizard named Stradus, who will become his mentor and father. Stradus also has a dragon named Cynder living with him. The banter between Hellsfire and Cynder was one of my favorite parts of the novel!

"You should feel so lucky, little Hellsfire. But I must say it was fun getting to know a human who is young and bold, rather than one who is old and tired." Cynder and I laughed at his joke, glad Master Stradus wasn't around to hear it. "It has been fun trading quips with you, even though you were outmatched by a far superior being."
I grinned at him. "Yeah, right."

Catalyst is also a "coming of age" novel. Hellsfire falls in love with a princess and throughout the novel tries to court her and saves her life, although she is definitely capable of saving herself. There are a multitude of side characters who were part of "Hellsfire's merry band to save the kingdom", as my consciousness christened them. The character development of the smaller characters was well done, something authors often overlook when they only focus on the main characters. The only thing I did not like about Catalyst is the somewhat predictable plot. There were some surprising twists, but it essentially has the template of many other fantasy novels: Protagonist discovers his power, goes to study with a teacher until he grows up, learns about some kind of conflict, saves the world and meets a beautiful along the way. Does this remind you of Eragon? There was one element in particular involving a king and a villain who wants to usurp the throne that reminded me of Lord of the Rings. However, Marc Johnson's writing is stupendous. His detail, imagery, and character development made this novel an amazing read.

I think Catalyst is meant for readers in their tweens or early teens, so it's a YA fantasy novel. The vocabulary isn't very advanced, but that's good for a fast read. If you're like me and you absolutely HAVE to know what a word means so you go running for the nearest dictionary, Catalyst will be a more relaxing read for you. Adults may not enjoy this novel as much as teens.

There's not much more I can say about this novel before I spoil something. I really enjoyed Catalyst, and if you are a teenage fantasy lover, I think you will too! Put Catalyst on your to-read list if you are looking for a fast read full of action and suspense.

More reviews coming soon from Steph and I! Look out for Steph's review of Destiny's Flower.